Before the Long-Range Transportation Plan, the Huntsville MPO maintained a Major Street Plan for the study area. Since the 1980s, Major Street Plans have been published by the individual governments of the MPO. You can view Huntsville’s current plan here, and Madison’s here.

The Major Street Plans were modified over the years to adjust to dynamic growth patterns.

Expecting major growth, the 1965 Major Street Plan was very ambitious, proposing expressways in every direction out of the city. This is the first known plan to show I-565 and the Northern Bypass. 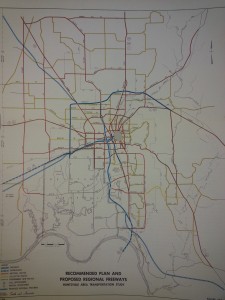 By 1972, growth in the MPO area had slowed, so many of the proposed highways were removed. However, I-565 and the Northern Bypass remained in the plans. 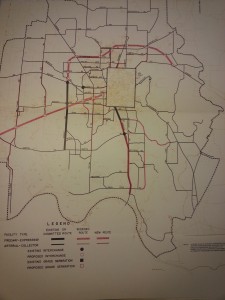 In 1988, I-565 was under construction. The Northern Bypass was moved north of Wade and Smithers Mountains, paralleling Bob Wade Lane. The Southern Bypass makes its first appearance on this map, with a similar alignment to today’s Arsenal East Connector. 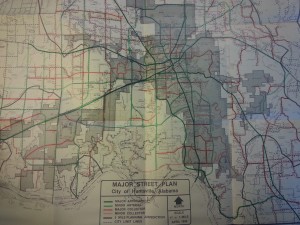 The 1993 Huntsville Major Street Plan moved the Southern Bypass onto the Arsenal in order to connect to Rideout Road/Research Park Blvd. Due to post-9/11 security concerns, the current incarnation of the Southern Bypass, the “Arsenal East Connector,” route the road around the perimeter of the military base. Today’s Northern Bypass alignment west of the Parkway is similar to the one proposed in 1993, but intersects US 72 East near Chase Industrial Park. 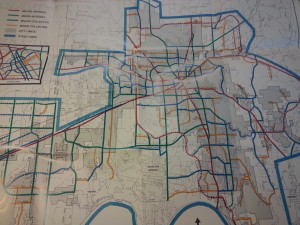